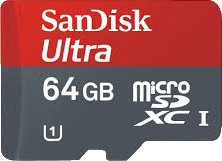 As Confucius used to say, shit happens. He was a smart lad so there is no point not to believe him.

Shit that happens to happen is usually a bad shit. More or less. Ocasionally you discover that some of the bad shit happens only to unravel a surprisingly good shit later on which is exactly my case, right now.

By the way I can see a strict analogy between the above and the way local meteorologists build their weather predictions: if you can't see the mountain, it is raining. If you can see it, it will be raining.

Because of some older shit that happened to me in the ancient past, I belong to the latter group which is why the amount of my despair was minimal, when my MicroSD card died.

I installed it into my handset ages ago. My smartphone is now officially almost three generations old so the card was mounted some 2 years ago (and never removed) but it is still pretty snappy; mainly due to the fact that I finally managed to root it and strip it off all the shite installed originally by the manufacturer for no reason other than increasing my heart rate, and also from the fact that I try to limit its apparently limitless possibilities to a bare minimum of applications.

Anyway, it died. It died gracefully, showing some early symptoms first (occasional lack of connectivity here and there) so I managed to backup even the most recent stuff. Then it died permanently, and for good.

What, for heaven's sake, could possibly be good in a broken MicroSD card, one might ask?

Well, believe me or not, I was quite surprised to discover that the transfer rates between my phone's memory and the card were...

(...searching for some civilized wording acceptable by a wider public... no matching terms detected, falling back to default....)

...were f*cking crappy. Once I removed the card, the phone started to feel like a Ferrari compared to Lanos. I haven't driven any of them but I'm sure you get what I mean. Suddenly all the tiny lags in the UI disappeared, applications started to run in half time and so on.

The final point is: if you ever have to install a memory card in yur smartphone, make 1000% sure you get a proper, fast, modern one. Otherwise you will cripple your device for good.

Death is always a happy ending for yourself. Either you’ll die after a decent life or end a life of suffering.~Shower Thougths