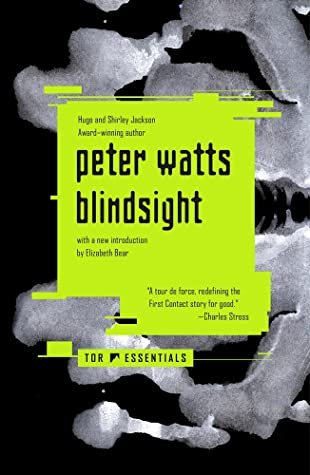 Some time ago I reviewed here a book called "The Time-Lapse Revolution", which turned out to be quite different from what I had expected, but in spite of that - or maybe because of that - I liked it very much. For the lack of better ideas, I looked at the list of other works by P. Watts (and there are quite a few) and grabbed the first one, "Blindsight". From a brief glance at the reviews, I figured it was hard-sf: aliens attack, Earth sends a team to do some reconnaissance before they reach our planet - in a word, nothing extraordinary.

The beginning was quite dispiriting. Something about vampires. Bloody hell. I almost put the reading down, luckily I managed to get to the second chapter… and it was a really good decision.

Yes, the book is about how mysterious aliens came to our solar system, and how Earth sent a team to find out whats and hows, but there's no pew-pew shooting lasers or chasing each other around asteroids. Oh, no.

What we have here is a very, very densely packed mix of ideas from biology, cosmology, neurology, physics, philosophy, and evolution.

The afterword (which also includes a list of references to external sources) takes up 10% of the whole book! Watts has done an amazing job and I suppose you would have to read the whole thing at least three times to catch all the hidden gems.

The main theme revolves around what consciousness is, where it comes from (and why) and whether intelligent life is possible without consciousness.

Furthermore, in "Blindness" we have a broadly explored question of the impossibility of communication between cosmic races. One of Stanisław Lem's favourite topics (see: "Fiasco") went really deep here.

The four main protagonists (or seven, depending how you count - schizophrenia is not considered a disease any more, it has been promoted to superpowers) are led by a vampire who looks and behaves as if he had to stop himself from murdering his crew with all his willpower. Each of the four is modified in some way (either by their own will or as a result of childhood illnesses and their unusual treatments). The presence of the vampire is very cleverly (and plausibly!) explained scientifically. We have a super-fighter (ex-military), a super-doctor, a Synthetic (narrator) with half of his brain carved out, the Gang of Four (one body, four personalities), the vampire who leads them all and - as if that wasn't enough - an intelligent space vehicle in which they all travel. On the other end - a mysterious Object somewhere far beyond Pluto's orbit, evidently not yet finished, evidently constructed by intelligent beings. It takes more than half of the book to understand what the alien representatives even look like (ish). Then they manage to catch two of them to try to decipher the way they communicate.

Overall the book is quite grim. Current events are intertwined with the narrator's memories from Earth. There are plenty of moments when it turns out that what we have learned can be tossed into the garbage bin, because things are not as they seemed.

To sum up - I recommend it! The book is difficult and dark, but at the same time full of richness. It needs to be savoured and read in a slow pace.