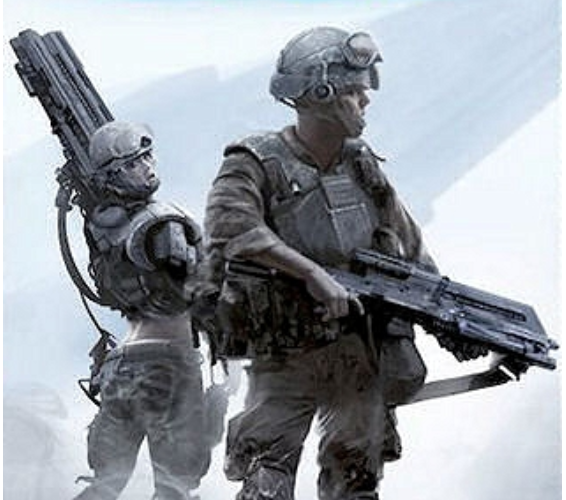 Artificial intelligence is a cool invention, as long as it doesn't get too carried away. And when it does, things can be very tricky. It's not too bad if it tells us where to put the dustbin or what shade of pink we should paint the wall.

Worse, if it eradicates three quarters of humanity.

Michał Cholewa's "Gambit" opens a 6+ pieces series of stories about a world in which Artificial Intelligences have started to live their own lives, have finished off most people and have become persona non grata ("personis non gratis"?) The remnants of humanity, instead of reuniting properly, are still divided into the usual factions, not only fighting each other, but also with the Artificial Intelligences.

We should note that they fight on a cosmic scale, because we have mastered interstellar travel!

So much for the introduction. In order not to reveal too much, I will only say that the action of "Gambit" takes place - with very few exceptions - entirely on a single planet, full of fog, swamps and mushrooms. A planet, on which a long time ago (even before the AI invasion) a vehicle crashed that might contain key strategic information.

Aided by a lot of positive reviews, I was really hoping for something more than just a fairly standard swamp slaughter, but somehow I got through three quarters of the novel (it's neither boring nor buggy… I just expected more) - and I don't regret it! After all, keep in mind that this is only the beginning of the series, so the various plots unfold unhurriedly but with cast-iron consistency.

The ending is very promising. As I am writing this, I am already in the middle of second volume (" Cutting Point"), which draws you in much more. There are a lot of characters, there's my favourite snappy military humour, interesting technologies, moral dilemmas, there's pew-pew! with lasers and a bunch of other stuff I really like.

But let's not jump ahead of the facts.

As far as I know, there is currently no English translation available so your only chance of reading "Gambit" is if you know Polish. Or wait for a translation 😉

Zapisz się
0 komentarzy
Inline Feedbacks
Zobacz wszystkie komentarze
If someone sued over luggage, it could be a suit suit or a case case.~Shower Thoughts