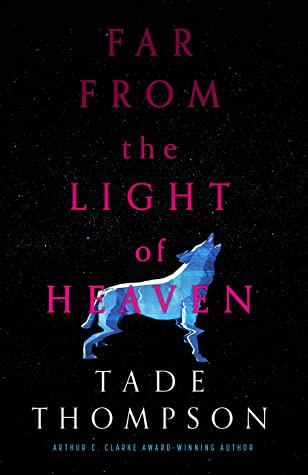 If a well-known writer reads our book, likes it, and then mentions it in the afterword to his blockbuster, there is a good chance that more people will buy our work than just grandma Audrey, uncle Kenneth or the neighbour from downstairs.

I first came across the "Far from the Light of Heaven" novel via the last part of "The Expanse". I took a chance, read it, liked it, now it's time for a review.

In the opening paragraphs we meet Michelle, who had dreamed of being an astronaut since her childhood. Her father went to the stars, and she wants it too. From an early age she tries to do everything she can to get her interstellar pilot credentials - and eventually she succeeds. The only trouble is that, in the meantime, artificial intelligence tech has improved to such an extent that now all space vehicles are piloted by machines, end-to-end. Human "boss" is only needed because of regulations, sitting comfortably in his chair and doing nothing most of the time. The information that AIs don't malfunction is repeated several times so it's obvious that it will be Michelle who gets on a first rocket with AI failure.

But let's not get ahead of ourselves.

I will traditionally refrain from elaborating on the plot - I don't want to spoil the work of the author (Tade Thompson). All I want to say is that if this book was stripped of its sci-fi elements (like space travel, AI and so on), it might easily land in the "crime fiction" category. It is definitely not a Space Opera kind of a story.

The author has a medical degree, but he prepared quite well to write this book from the technical side. The technologies his characters use for FTL travel are well rooted in contemporary theoretical physics, and all aspects of space journey and its impact on the human psyche and body are very plausibly explained (and based on actual experiments of Soyuz and other space programs).

Here I have a dilemma. The first half of it is a tad too chatty and single-tracked for my liking. I wouldn't give it more than four stars out of seven. However, from the moment we learn the identity, the motive and the perspective of Michelle's main adversary - ah, this is where things get really exciting. It took me about two weeks to read the first half. The second half I read in two days. I think it would be fair to rate the whole thing at a solid 8/10.

Remember all the birds you saw outside as a kid? They are all dead.~Shower Thoughts